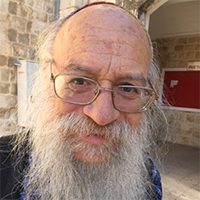 Reuven Goldfarb writes poetry, essays, fictionalized memoir, and alternate reality fiction. He makes his home in Tzfat, a mountain village in northern Israel, where he hosts a monthly meeting of the Upper Galilee branch of Voices Israel and has begun teaching a course entitled "Formal Elements in Poetry". From 2009-2012, as a freelancer, he taught "Poetry Immersion" and "Short Story Intensive". In a previous century he was the founding editor and publisher of AGADA, the illustrated Jewish literary magazine (1981-88), and subsequently taught Freshman English at Oakland's Merritt College (1989-96). Reuven's poems, stories, feature articles, profiles, reviews, opinion pieces, and Divrei Torah have appeared in dozens of newspapers, magazines, and anthologies and won several awards. Several of his recordings are available on YouTube and Soundcloud. His poem "Champions" won an Honorable Mention in Winning Writers' 10th and final War Poetry Contest (2011).