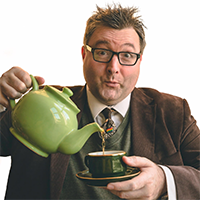 Robert Garnham has been performing comedy poetry around the UK for ten years at various fringes and festivals, and has had two collections published by Burning Eye. He has made a few short TV adverts for a certain bank, and a joke from one of his shows was listed as one of the funniest of the Edinburgh Fringe. He was recently an answer on the TV quiz show Pointless. Lately he has been writing short stories for magazines and a humorous column in the Herald Express newspaper. In 2021 he was nominated for the Pushcart Prize and shortlisted as Spoken Word Artist of the Year by the Saboteur Awards.

Winning Entry: The Call of the Mild