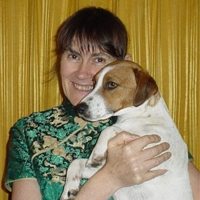 Tasmanian Sally Odgers has been writing poetry for forty years. In high school, she studied mostly modern poetry, (which she didn't much like), but fortunately the textbooks also contained metrical verse from earlier times, which she loved. She has been a full-time writer for many years, and enjoys writing fantasy. Much of her poetry is based in fantasy and myth, and employs adventurous rhyming schemes and invented forms. She classes this as retro-Victorian metrical verse.

Apart from commercially-published rhyming picture books, such as Dreadful David and Angie the Brave, Sally has produced a self-published book called Writing Metrical Verse and a collection called Myths of the Mind. Two more collections, Fernseed for Fairysight and Spinning Pearls, are published by Eternal Press.