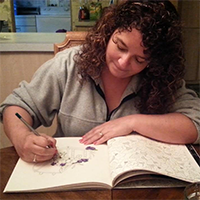 Tamara Sellman is native to the Pacific Northwest. She works as a writer and educator in the healthcare field, specializing in sleep medicine and multiple sclerosis topics. She attended Columbia College and was graduated with a degree in journalism in 1990. Since then, she has worked in various facets of journalism, writing, editing and publishing. Sellman launched and oversaw the literary website, Margin: Exploring Modern Magical Realism, between 1998 and 2007. Two offshoots of this publication included Periphery, a magical realist print zine, and Southern Revival, a print chapbook which successfully raised enough funding to restore a small-town library in Louisiana following Hurricane Katrina. She is also the publisher of the limited edition series of anthologies, Vitamin ZZZ, which collects creative writings about sleep disorders.

Her most recent work has appeared or is forthcoming in Adolphus Press, Blanket Sea, Cirque, The Coil, Collective Unrest, Crab Creek Review, Gargoyle, Halfway Down the Stairs, the Lift Every Voice anthology, and Postcard Poems and Prose. Sellman's work (prose and poetry) has been twice nominated for the Pushcart Prize. Her creative nonfiction won the Dr. O. Marvin Lewis Essay Award and was nominated for the prestigious John S. Burroughs Nature Essay Prize. Her novel, The Borderlands, was a finalist in the Pacific Northwest Writers Association mystery novel category. She has also placed work in numerous other smaller press contests since 1997.

Sellman was diagnosed with relapsing remitting multiple sclerosis in 2013 but her neurologist suspects she's lived with the condition since 1975. She co-admins several groups and forums for people with multiple sclerosis and writes columns blending her personal experience and professional expertise for multiple patient advocacy healthcare websites, recently signing on as an MS "influencer" for Healthline. Her latest work is a book titled Intention Tremor, a full-length collection of works which chronicles her life during and after her MS diagnosis using hybrid literary forms. Current works in progress include a speculative fiction novel, a short story collection of speculative fiction, a nonfiction book on sleep health, and a chapbook of prose poems and flash fictions. She currently lives and works in Kitsap county, Washington state where she drinks Starbucks coffee everyday.

Winning Entry: Suddenly, She Can’t Finish Sentences When She Tries to Order Starbucks