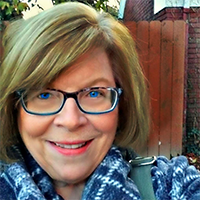 Teri Foltz is both a playwright and poet. Her first book of poetry, which includes "Estate Sale", is titled Green and Dying and chronicles the human experience from childhood, adolescence, adulthood and the process of aging. She is a retired English and Drama teacher. Her plays have been produced in NYC, Chicago, San Diego, Vancouver, Louisville, and Cincinnati. Her latest play, "Incorrigible", won the Roots of the Bluegrass Playwriting Contest in 2017. She lives in Northern Kentucky with her musician husband. They have two grown sons who are creative in their own right. Teri enjoys the support of several writing groups. Teri attended the Key West Literary Workshop during January of 2018 where she studied with her favorite poet, Billy Collins. She is thrilled to receive an Honorable Mention in the 2017 Tom Howard/Margaret Reid Poetry Contest.