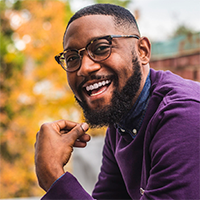 Originally from Washington, DC, Anthony R. Keith, Jr., Ph.D. (Tony) is a Black, gay spoken word artist, poet, and Hip-Hop educator. Or, you can just call him an "Ed Emcee". Dr. Keith began writing poems as a kid growing up in the '80s and '90s as a way to express his feelings about race, masculinity, spirituality, and sexuality, as he battled against racism, White supremacy, poverty, and homophobia. Inspired by Hip-Hop culture, the emotional rhythmic storytelling of poetry in rap music, and legendary Black poets and civil rights activists of the '60s and '70s, Dr. Keith discovered his love of Black language and his purpose to narrate the history of Black experiences from his time through written and spoken words that could quite literally "move crowds" like an emcee (mc).

He has had featured performances and "poetic lectures" at Apple Carnegie Library, Washington National Cathedral, the US State Department, the John F. Kennedy Center, Harvard University, George Washington University, the University of Witwatersrand in Johannesburg, South Africa, and the United African Alliance Community Center in Tanzania.

Dr. Keith is a multi-year fellow and grant awardee from the DC Commission on the Arts and Humanities and Humanities DC for his public and scholarly work about Hip-Hop, spoken word poetry, and racial justice in American education. His writing has been published or is forthcoming in "Centering Possibilities in Black Education", Journal of Black Masculinity, Journal of Negro Education, and Journal of Critical Media Literacy. He is co-author of "Open Mic Night: Campus Programs that Champion College Student Voice and Engagement", which won an outstanding award from the American Educational Research Association.

He is a first-generation college graduate and holds a Ph.D. in Education Leadership from George Mason University, where his dissertation Educational Emcees: Mastering Conditions in Education Through Hip-Hop and Spoken Words won an outstanding award, an M.Ed. in College Student Affairs from Penn State University, and a B.A. in Communication from The University of Maryland College Park.