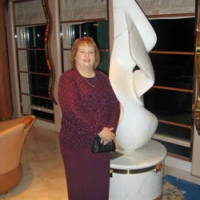 I was born in Wisconsin and have lived my entire life here. I grew up just outside the small town of Afton. I have been blessed with a son, a daughter, and a stepson. I have two beautiful daughters-in-law, and five delightful grandchildren. I work as a Respiratory Therapist, and write when I can. My wonderful husband is my best friend, and my greatest supporter. He loves everything I write (even when it's not very good). I love to travel, and read, but writing is my passion. I believe that we all receive certain gifts from our creator, and mine was a love of words. When I was in Junior high school I wrote a poem called "I Wonder". The teacher refused to grade it, saying it was not possible that I could have actually written it, and suggested that I may have "seen it somewhere else". Well, here's to you Mr G. I did write it, and I haven't stopped writing since.