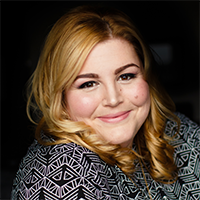 Christina Myers left a long-time career in community journalism in 2013 with the intent of taking a break from the keyboard—but then promptly continued to write anyway. Since then, her work has appeared in the anthologies Boobs: Women Explore What It Means to Have Breasts (Caitlin Press, 2016), Emerge15 (SFU, 2015) and Word on the Lake, as well as Skirt Quarterly, Voices of Motherhood, CBC Radio, Room Magazine and elsewhere. She has been shortlisted or won a number of literary awards for both fiction and nonfiction and her freelance writing continues to appear in magazines and online. She's a past graduate of The Writer's Studio in Vancouver and a current volunteer with the program as an apprentice mentor. Christina lives in Surrey, Canada with her husband and kids, in a house that is not nearly large enough to accommodate her habit of picking up stray pieces of vintage junk at thrift shops.