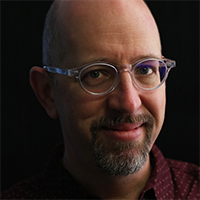 Poet laureate of Richmond, California, Daniel Ari produced the 2017 Richmond Anthology of Poetry, the city's first, representing its diverse voices. His own book One Way to Ask (Norfolk Press, 2016) combines original poems in a new 17-line form called queron with illustrations created and curated in collaboration with 67 artists including Roz Chast, R. Crumb, Henrik Drescher and Wayne White. The book won the Eric Hoffer da Vinci Eye Award for design and was a finalist for the Lascaux Poetry Prize. His poems have appeared in Poet's Market, Writer’s Digest, McSweeney's, Defenestration, carte blanche, Thema, NonBinary Review, Pearl, and many others, but none so prestigious as the honorable mentions list of the Wergle Flomp Humor Poetry Contest. Daniel supports and fuels his poetic life through his career as a marketing copywriter where he has written haiku for Google. For pay.

Winning Entry: If I Can Hear You Chew, I Have Fantasized About Your Death

The WinningWriters.com connection issue appears to be highly localized. It should not affect most people. If you have any difficulties, please email adam@winningwriters.com. pic.twitter.com/a4Z20gRZzb

.@pingdom, which checks our website every 5 minutes from sites around the world, says it is able to reach WinningWriters.com today, so the connection issue may be a limited problem. In any event, you can always enter our contests directly at winningwriters.submittable.com/submit

WinningWriters.com may be down ("ERR_CONNECTION_REFUSED"). We are working on the problem with @DreamHostCare. Thanks for your patience.