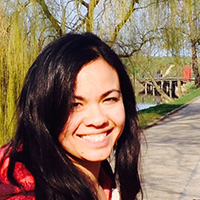 Elizabeth Miki Brina received her MFA in Creative Writing from University of New Orleans, and her BA in English and Philosophy from Northeastern University in Boston. She taught high school special education for six years. Now she teaches composition and ESL. She writes mostly personal essays and is working on a memoir that focuses on the marriage between her mother, a native of Okinawa, and her father, a soldier who was stationed on the island during US military occupation, as well as the complications of growing up as the only daughter of two people from such vastly different backgrounds. Her work has appeared or is forthcoming in Hyphen, New Delta Review, So to Speak: a feminist journal of language & thought, and Under the Gum Tree, among others.

Winning Entry: How They Met