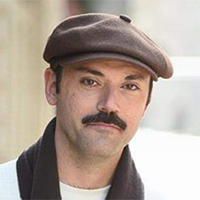 Francesco Granieri is an Italian-American author from Atlantic City, New Jersey. He is an Emmy award winning Graphics Interface Coordinator with ESPN/ABC and a former teacher in the New Jersey public school system.

Pavarotti and Pancakes is Francesco's first full-length work. Committed to "slinging as much mud as possible," Francesco hopes to carve out a home for himself on the world stage. Fluent in three languages, he is a musician and actor who longs to be an inspiration and a source of motivation to his readers.

After years of living within the framework of a painfully dysfunctional home, Francesco has determined that what he spent so long attempting to cover up and escape from, was instead a challenge to be overcome. In the writing of Pavarotti and Pancakes, he has realized that the sharing of his story and ultimately his triumph, could be of benefit to others who have been touched by adversity.

Diversity in Publishing from A to Z: A List of Book Publishers Who Specialize in Diversity and Inclusion | hereweeread.com/2019/02/divers… via @hereweeread #publishing #diversebooks pic.twitter.com/OAzDvDVpPl