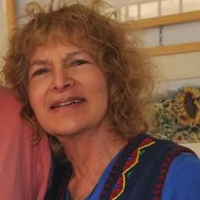 Helen Bar-Lev was born in New York in 1942. She holds a B.A. in Anthropology, has lived in Israel for 49 years, and has had over 100 exhibitions of her landscape paintings, 34 of which were one-woman shows. Her poems and artwork have appeared in numerous online and print anthologies including six poetry collections, all illustrated by Helen. She is the Amy Kitchener senior poet laureate and was nominated for a Pushcart Prize in 2013. She is the recipient of the Homer European Medal for Poetry and Art. Helen has served as Assistant President as well as Overseas Connections Coordinator for Voices Israel, and Chief Editor of Voices Annual Anthology. She lives in Metulla, Israel.

Suggestions to the Young Poet

Write, just write
sort through your wardrobe of words,
listen to the air, the words are there

Write for the pleasure of it,
for the pain, the pride,
the power of it

Write about anything
that cries or caws
or moves or mews

Write of things that fly or crawl,
of things with feather or fin,
scales or skin

Describe the rain, a leaf, a flame,
write about angels, or devils if that suits you,
tell of the mundane, the unusual

Write a sonnet or a Haiku,
write whatsoever you choose,
don't allow anyone to discourage you

Write about a purr, a puddle,
a colour, a flower, a shape,
write about sun and shadow and shade

Write about justice or its absence
write about the universe,
about comets and planets

Describe a fragrance, the wonder of incense,
write about arrogance, ignorance,
illness, terrorism

Write about music,
its cadence, its rhythm
its instruments, its essence

Write of your dreams,
tell of a memory, of family,
describe beauty, anxiety

Write about controversy
about harmony, astrology
about mythology, history
the imaginary, reality
write of the mystical
the spiritual the magical
the intolerable
the miserable
the pleasurable
the political
the individual

Winning Entry: Night in the North

Winning Entry: The Path to a Village

Winning Entry: From This Desk