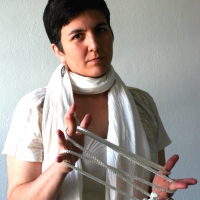 Jennifer Morales is a freelance writer, editor, and activist in Milwaukee, Wisconsin. Jennifer holds a B.A. in Modern Languages and Literatures from Beloit College and is currently enrolled in the Creative Writing program at Antioch University-Los Angeles, pursuing an M.F.A. in fiction. Her poetry has been published in Between the Heart and the Land/Entre el corazón y la tierra (MARCH/Abrazo Press, 2001). "Heavy Lifting," the central story for a collection of interconnected stories she is currently working on, was published in The Long Story in spring 2010.

From 2001 to 2009, she served as an elected member of the Milwaukee Board of School Directors, the first person of Latino descent to hold that position. In 2004, she ran for Wisconsin State Senate District 8, surprising allies and opponents alike when she garnered 43% of the vote against the 12-year incumbent. Previously, she was the editorial assistant at the educational journal Rethinking Schools; assistant director of two education policy research centers at UW-Milwaukee; and the development director for 9to5, National Association of Working Women.