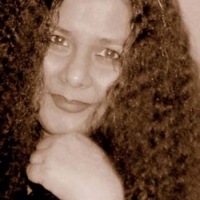 Julian Damanas lives in Atlanta, Georgia. She is a fugitive from academia where she studied attentional mechanisms and their correlational relationships to human intelligence under the rubric of the visual phenomenon known as Inattentional Blindness.

I have always been an adventurer, for whom experience speaks in unintelligible and archaic tongues.

I have danced, naked and shaven, in stinking, sacrificial blood at a temple-rite, and scattered bloodstained rhododendrons at the feet of phallic pillars that stood in sentinel columns beneath a moon-tilted night.

I have deciphered the salt and the sand, and played with my phantasmagorical ancestors in the twisted shadows of ancient shrines smeared with graffiti and piss and holy water.

I have done those things.

I've been assaulted by the cacophony of seditious temple-bells whose voices spoke the primeval warning, "Respice post te! Hominem te esse memento!" which, thanks to my faulty Latin, translated as, "Don't look back! You'll turn into a homonym!"

I've been an editor, a teacher, an actress, a fashion designer, a nightclub singer, a child-laborer, a kept woman, a wife, a mother, a tea-garden socialite, a palace denizen, a temple mascot, a clubkid, an office-drone, an academic and a stonemason. I've been a tailor, a wanderer, a homeless bum, a volunteer and a barbarian.

I've driven 60 miles wearing a blindfold. I've hunted man-eating tigers, and rescued virgins from naughty ex-maharajahs. I've sat in chairs of solid gold. I've lived in disease-wracked slums. I've been waited on hand and foot. I've been treated like a whore. I've been an icon and a loser. I've been sued and dismissed, insulted and worshipped, venerated and reviled.

And I've learned nothing except that life is a fragile structure built of pridian dreams.

"Gasoline" was originally an epic poem of the same name. I have not attempted to publicize my other work due to restraints on submission length. My other works are "Six Pages of Angels", "Celedin", "Liber Genesis" and "Song of Sind".

For me, poetry is primarily a performance art, quintessentially lucent, infinitely accessible, its language taut with the foibles and the idiomatic follies of its present-day audience.