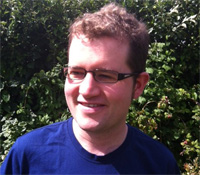 Luke Melia lives and works in London. He writes fiction in his spare time. In 2011, his entry The Temp was shortlisted for the Crime Writers' Association's Debut Dagger Award. In May 2012, his short story "The Novel Factory" was highly commended in the Bristol Prize. Luke is currently developing a number of short stories (including further Tad Lincoln tales) alongside drafting a debut crime novel. His ambition is to be a full time author.