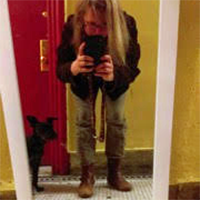 Michelle Reiter was a small-town journalist for about fifteen years, a career she began working for a base newspaper in the United States Navy. She left journalism to attend Union Theological Seminary in New York, where she trained to be a chaplain. The overwhelming consensus in seminary was that she was a writer and that was her spiritual calling. Now Michelle lives in New York and writes, will enter Columbia University's School of the Arts next year to begin her Master of Fine Arts degree, and hopes eventually to teach and lead workshops on writing as therapy. She has an aged miniature schnauzer named Rosie, a Republican, with whom she watches the political debates.

Winning Entry: Untitled (“The dog and I are watching the debate…”)