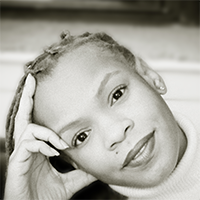 Monique Ferrell was born and raised in the Bedford-Stuyvesant neighborhood of Brooklyn, NY. Her writing is deeply impacted by the experience of surviving both a violent neighborhood and household. It is also influenced by her cultural community and heritage; her struggles with depression/anxiety; the fighting and enduring spirit of her gender; alongside issues of race and what it means to be Black, woman, and uniquely human within an evolving American/global society. A writer of both poetry and fiction, her work has appeared in a myriad of noted creative writing magazines, journals, and anthologies: American Poetry Review, Antioch Review, North American Review, Alaska Quarterly Review, Quarterly West, Valley Voices, New York Quarterly Review, Walt Whitman: The Measure of His Song, Token Entry: New York City Subway Poems, Out of the Rough: Women's Poems of Survival, and Rabbit Ears: TV Poems, among others. Additionally, her poetry was recently featured on American Poet Laureate Tracy K. Smith's podcast, The Slowdown. Currently, she is hard at work on multiple projects, including a collection of satirical essays titled Things They Did to Me: My Family in Shades; her fourth poetry collection, titled Dulce Reina En Fuego (Sweet Queen On Fire); and her first novel, Tuck, which examines the myths surrounding American Black masculinity and familial and cultural responses to substance abuse and Mental Illness/Depression. Ferrell, the author/co-author of a number of essays and books on popular culture, identity, and race, has also published three poetry collections: Black Body Parts (Cross + Roads Press), Unsteady (NYQ Books), and Attraversiamo (NYQ Books).  The latter won the Julie Suk prize for poetry and the Honorable Book Prize for Poetry from the Black Caucus of the American Library Association (BCALA).