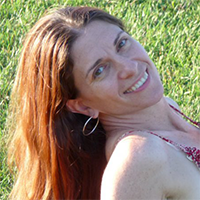 Laqueur's novel An Exaltation of Larks was the Grand Prize winner in the 2017 Writer's Digest Awards. Her debut novel The Man I Love won a gold medal in the 2015 Readers' Favorite Book Awards and was named Best Debut in the Feathered Quill Book Awards. Her follow-up novel, Give Me Your Answer True, was also a gold medal winner at the 2016 RFBA.

Laqueur graduated from Alfred University with a double major in dance and theater. She taught at the Carol Bierman School of Ballet Arts in Croton-on-Hudson for ten years. An avid reader, cook and gardener, she started her blog EatsReadsThinks in 2010. She lives in Westchester County, New York with her husband and two children. Follow Laqueur on Facebook and Instagram.

Winning Entry: An Exaltation of Larks