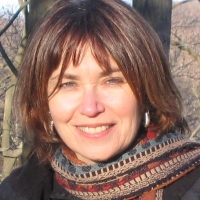 Susan Gubernat's first book of poems, Flesh, won the Marianne Moore Prize and was published by Helicon Nine Press. Her poems have appeared in Crab Orchard Review, Cortland Review, Michigan Quarterly, and Pleiades, among others. Her second book manuscript, Shaggy Parasol, has been a runner-up or finalist in such contests as the National Poetry Series, the Dorset Prize, the FIELD prize, the New Issues Green Rose Prize, and the Philip Levine Prize. She has held artist residencies at Yaddo, MacDowell, Virginia Center for the Arts, and the Millay Colony. Gubernat is an opera librettist (Korczak's Orphans; composer Adam Silverman) and an Associate Professor at California State University, East Bay, where she and her students have launched a new national literary magazine, Arroyo Literary Review, focusing on, but not limited to, writers of the Bay Area.