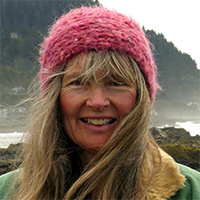 If there was ever a child with a habit of rolling in boxes down cut glass hills and skinning her knees... it was me. From a young age I listened for sounds in the dark, fell off stoops, imagined rabbits taking over the basement, wondered how much hair the black habits of the nuns hid, where god goes to play, how the light of the moon stays palpable.

My childhood was lived out in a three-family apartment house in Queens with a tiny postage-size concrete pool we called Trudy, complete with mermaids, angelfish, a hooked pole line and beach blanket. It was only about 18 inches deep and barely held water but I still wore a swim tube and flapped toward the sea. Come summer evenings we'd play ping pong outside and my father and brother would slam the ball so hard I thought it would weep. My mother chain-smoked cigarettes and splashed black paint all over the living room walls in an attempt to turn her life back toward bohemian, a nightspot for musicians and samba. It was a curious childhood... my father the product of orphanages, my mother with her cargo trunks of satin gowns, painted canvases turning dusty in the basement where they slept at night. Only later when he was 43 years old did my father learn to drive a car. My mom died too young of heart failure. My brother struggled long and hard with her loss and also passed away too early.

By the time I entered high school I knew one thing for sure... I was most comfortable living inside my imagination and was destined to be a writer. Every literature and art class inspired me with what was possible. I shaped an elephant of clay and sent it sailing out the window and onto a bigger life, became the editor for our literary mag, persuaded teachers to let me produce stories and poems instead of just furnishing them with dry essays. At the same time I was the girl with wobbly skates, a woeful lack of self-confidence, too lost to negotiate the struggles of the world and construct a credible literary life.

With the help of loans and scholarships I majored in English Lit and Creative Writing at the University of New Hampshire, and through a series of fortunate events went on to a college exchange program in England, where my whole world shifted. I studied, fell in love, stayed there for eight years and managed to backpack to many different parts of the world. While at the Sussex campus I pedaled an old Raleigh three-speed down country lanes and up into the hills beyond Arundel castle where the Smiling Cow Pub served a mighty ploughman's lunch and a mischievous water vole had taken up residence in the stone well behind the hollyhock. I never saw the vole but spent a good deal of time imagining his adventures.

A few years later I finished my M.A. in Colorado, did a graduate sabbatical near San Francisco where I read Meister Eckhart and the Rhineland mystics, and went on to complete my MFA program in Creative Writing at the University of Oregon. I remember sitting on the concrete under an overhang in the wet grey winter outside the law school complex, scribbling drafts of poems with a pen and editing them day after day between slugs of coffee, while curious students inside the glass windows stopped to wonder what the heck I was doing. It was a time though of not just hard work and stretching, but delight in being engaged in what I knew for sure was my life's work, and thanks to a teaching fellowship for a time free of the need to knock on doors for jobs and stress over rent money. Soon after this I found myself living in a farmhouse a mile into the woods in the Coast Range of Oregon teaching lit as an adjunct at a small private university, writing poetry, growing a very big vegetable garden, watching herds of elk, and sculpting massive clay figures of women that were impossible to move without many strong arms.

I have had a crazy assortment of jobs that let me glimpse many different shades of life and humanity—teaching children how to papier-mâché winged dinosaurs and act the Snowdrop Queen in a Berlin opera, work in retail shops, a paper box machine factory, counseling at-risk bi-lingual students, freelance writing Pacific Northwest travel books, coordinating advertising and tv shots for an international hotel chain, teaching history and English lit in a high school for hotshot ski racers, offering up yoga classes in thin mountain air at 8,500 feet, a stint as a flight attendant, counseling sexually abused teenage girls, social work with drug and alcohol addicts, an agency therapist to children and families, and lately as a lowly paid adjunct community college instructor sharing with young people and adults who inspire and humble me. Feels very odd... as if I am talking about somebody else... not this girl who is basically shy and likes to hide away her mornings in a window seat contemplating birds.

One of the most exciting adventures of my life has been becoming a mother to my son and wonderful daughter, who adopted me when she was a 4-year-old living in an orphanage in China. I have felt so privileged in my life to be a mother.

There have been losses too, many, as well as single parenthood and other turns of events I could never have anticipated. But through and beyond them circles this deep abiding voice that impels me, keeps me tethered to this crazy, dreamy life of poems and art that I have never been able to let go of... they infest my days and force me to make room, make room. So I have tried to listen, be faithful.

In the past few years, thanks to scholarships, my writing has taken me on literary journeys to Italy, Mexico, the Czech Republic, Lithuania, Tbilisi, Georgia, Portugal, Scotland, and Maine.

In the Pink Arms of the City is my ninth collection of poems and was born about three years ago when I received a poetry scholarship from the University of Edinburgh and spent a year living, writing, and studying in Scotland.

I have many manuscripts of poems spread over my desk and bookcases and am trying to make a valiant effort to launch them into the world. I am drawn to issues of kinship, justice-making and dignity, like to contemplate the lives of women, hope for a world where there is room for everyone to sit and eat at the table.

Winning Entry: In the Pink Arms of the City