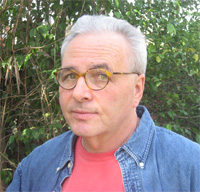 Tony Peyser writes poems about politics and pop culture for his own blog that is conveniently called PeyserPoem. Earlier this year, he read his poems on Pasadena public radio station KPCC when he was the resident poet for Patt Morrison's daily current events talk show. Mr. Peyser lives in Altadena, California with his wife, Kathy, and their son, Jeremy.

Winning Entry: I Want to Live in an Edward Hopper Painting

Winning Entry: What I Did in the 20th Century