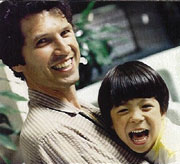 Viktor Tichy grew up in Prague, Czechoslovakia, and lives in Iowa. Father of four, architect-developer, and art teacher, he currently runs his child care center in Iowa City. He began to write poetry in Diane Frank's workshop 17 years ago, and has won prizes and publications in over 120 national and state contests, including an Honorable Mention in the 2004 Winning Writers War Poetry Contest for "Blue Eyes and Brandy". He is working on a nonfiction book about raising renaissance children and he is preparing seminars for parents and child care centers entitled Genius in Diapers.

Winning Entry: Hand, Baret, and Bayonet in my Mother’s Chest and Wild Mushrooms