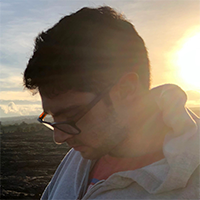 Zach Klebaner is a recent graduate from Hofstra University where he earned his B.A. in Film Studies and Production and took a lot of naps. In between his naps, he managed to create an open mic for student artists to connect and showcase their work, co-produce an improvisational theater troupe named Ambiguity, and complete a short film about a cult that spreads their message of abstinence through a fake prostitution service. An all around goofball with interests in comedy, hip hop, and a third thing that would tie this all together, he was inspired to create poetry after being exposed to the wondrous wordplay displayed by Chance the Rapper. After being told by several close friends that his poetry was "trash", he decided to begin submitting his work to various contests and publications to see if they were right. When he's not napping, Zach can be caught doing a bunch of other ordinary tasks that most others are also likely to partake in. He most appreciates a solid story, a hearty guffaw, and an eye-opening observation. If you have any of these, feel free to reach out to him.