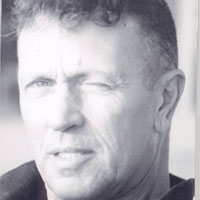 Brigadier General Alan F. Farrell is a longtime professor who taught French and English at Hampden Sydney College for nearly 25 years before coming to Virginia Military Institute. He holds a B.A.—Cum Laude and Phi Beta Kappa—from Trinity College in Hartford, CT, a master's in German and another in French from Tufts University in Boston, and a doctorate from Tufts in French. He served in Vietnam from 1968 till 1970 with the famous Fifth Special Forces Group, was wounded in action, decorated for heroism. He has been designated by the Governor as Distinguished Foreign Language Professor in Virginia and has earned the Virginia Association of Foreign Language Teachers' Distinguished Service Award. Dean of Faculty from 1996 until 2000, he teaches English and French here at VMI and he is Honorary Brother Rat to the Class of 2001.

Winning Entry: Martyrdom of a Mutt