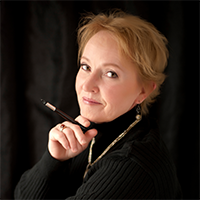 Delaney Green writes historical fantasy novels about Jem Connolly, an eighteenth-century girl with Second Sight who grows up in England and America between the Seven Years' War (French and Indian War) and the American War of Independence. Green also writes mystery and horror fiction, including "Tsunami Surprise", published in Bouchercon 2014: Murder at the Beach, and "If It Ain't Broke, Don't Fix It", featured online at CEASE, COWS. Under the name Debra Peterson, Green published Playwriting: A Manual for Beginners, as well as articles in Wisconsin newspapers and in Dramatics and A Second Opinion magazines. Green earned a bachelor's degree in English, Theater, and Speech at the University of Wisconsin-Eau Claire and a master's degree in Journalism at the University of Kansas. She taught high school English for twenty-five years. She also has worked as a reporter, a copy editor, a professional actress, a Broadway theater concessions manager, an adjunct professor, and a farm laborer. When she needs a break from writing, Green escapes to her garden to pull weeds and plant vegetables. She prefers the latter. She lives in the American Midwest with three cats, one dog, and snow. Find her online at DelaneyGreenWriter.com and on Facebook.