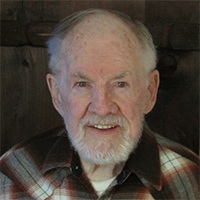 Tom Sheehan, in his 94th year, has published 53 books. He has work in Rosebud, The Linnet's Wings (100), Copperfield Review, Literally Stories (150), Frontier Tales, Green Silk Journal, and Rope & Wire Magazine. He's earned 18 Pushcart nominations, and 6 Best of the Net nominations, with one winner. Two more western collections will be released simultaneously by Pocol Press soon, The Townsmen and Cometh the Horseman and Other Stories (written by a man who has never been on a horse). In 2021 he won the Ageless Writers story contest with The Tale of Trot and Dim Johnny, and has submitted other books including $20 Grand, Jehrico's the Collector's Collection, Murder Down Canada Way, Silas Tully, Saugus Cop, An Accountable Death, and Beneath My Feet This Rare Earth often Slips into the Far-side of Another's Telescope.