An Incomplete List of My Wishes by Jendi Reiter 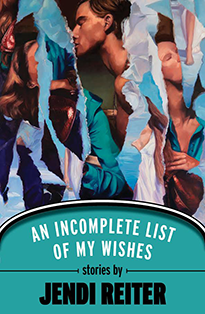 In these and other stories, Reiter explores the fraught relationships among queer and straight family members, the search for a post-traumatic spirituality, and the fine line between soulmates and intimate enemies.

The stories in An Incomplete List of My Wishes have won prizes from such journals as The Iowa Review, New Letters, Bayou Magazine, Solstice Lit Mag, and American Fiction. New York Times bestselling novelist Jacqueline Sheehan says of this collection, "Truth and humor are woven intricately, ripe with emotion and stripped down to the bone. You will read these again and again."

Buy it now at Amazon.

Read "Memories of the Snow Queen", a short-short story from this collection, at Grimoire.