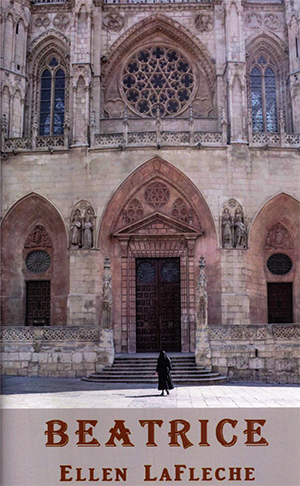 Ellen LaFleche, a judge of the North Street Book Prize, explores the emotional life of a semi-cloistered nun in this chapbook from Tiger's Eye Press. Sister Beatrice serves on a jury, bakes bread in the convent kitchen, scatters her mother's ashes in the ocean, and reflects on her friendship with another nun. Order directly from Ms. LaFleche for $10 at ElLaFleche@aol.com.

"The tides of the sacred feminine seek an outlet in the cloistered body of Sister Beatrice, a working-class mystic. The convent offers both refuge and confinement—the paradox of a women-ruled society where women must de-sexualize themselves. The ascetic environment cannot quench the vitality of Beatrice's imagination, which finds golden-faced gods in copper pans and lust's soft satisfaction in a raw quahog."
—Jendi Reiter, editor, Winning Writers, and author of Bullies in Love

Please enjoy these sample poems from the chapbook.

In bed,
sinking into a water-dream,
Sister Beatrice feels soft
ecstatic cramping. It begins
in the mauve folds of her cervix,
pushes dreamy blood-heat
down her mustached thighs.
Sister wakes to fragrant red petals—
a romance of roses
on her rough brown sheet.

In the kitchen,
swaying to the heavy metal
beat of cleaver blades,
Beatrice takes in the smell of hen-bones
being severed. Chicken broth simmers,
a scrim of oily gold in the pot's
copper canyon. Beatrice savors the faint
scent of garlic on Sister Veronica's palms.

Sister Beatrice fantasizes her own death

How Sister Veronica
will open the sickroom blinds
and Beatrice will watch the moon in full
fury shaking off
its blue-black burka of clouds.

How the night air
will smell like smoldering oak
leaves just before
they burst into smoke.

How fever's rank
heat will gather under Sister
Beatrice's veil, and Veronica
will break the convent
rule by lifting it
tenderly off her head—a kind
of triumphant uncrowning.

How death will hold
Sister Beatrice in layers of breathless
bliss, folding and unfolding
around her soul
like the floral origami
of a contracting uterus.

How Veronica will catch
the last spill of breath
in her cupped hands. How the slab
of weeping soap will sluice down Sister's limbs,
the serpent curve of her spine.

How Beatrice will taste
Eden's blueness between her teeth—
that cool forbidden juice
just beneath
the apple's sunburned scalp.

In the garden,
kneeling with the horse-headed
mantis, Beatrice hears the green creak
of its segmented neck. Its eye bulges
like a crystal witching ball.
Beatrice gazes her future—
Sister Veronica's veiled silhouette
moving through the peony bed.