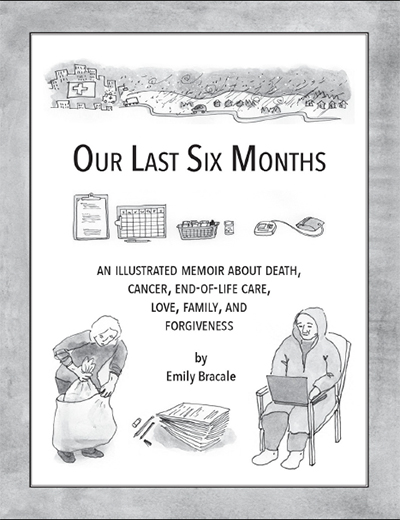 When independent single dad Aubrey reveals that he has stage 4 cancer, "normal life" goes out the window for his ex-wife and their thirteen-year-old son. They and others witness his brave efforts to heal himself in his final months of life as he struggles to come to terms with his mortality. The family learns on their feet as they encounter each new situation. The narrative shares an unsentimental description of the patient's experiences with hospitals and nursing care, the end-of-life decisions he encounters, the activities of his caregivers, the responsibilities of his health-care advocates, and the role of professional helpers such as Social Workers and Hospice.

"Emily Bracale of Bar Harbor, Maine won this year's Grand Prize across all genres for her graphic narrative, Our Last Six Months, a tender, homespun, and informative memoir of how her blended family came together to nurse her ex-husband through terminal cancer…Despite the heavy topic, the artwork has an intimate, humorous flavor, almost like The New Yorker's Roz Chast…We were so impressed with the potential of this format that we are adding a Graphic Narrative category for the 2019 prize."
—Jendi Reiter, awarding the Grand Prize to Our Last Six Months

"This is more than a memoir—it is an essential guidebook for others in similar difficult situations. The author gives us a direct and true account in an honest and openhearted way, never maudlin or sentimental. Illustrations help to tell this story with warmth and humor. This is a gem of a book."
—Jeanie Smith, Board President, The Whole Health Center