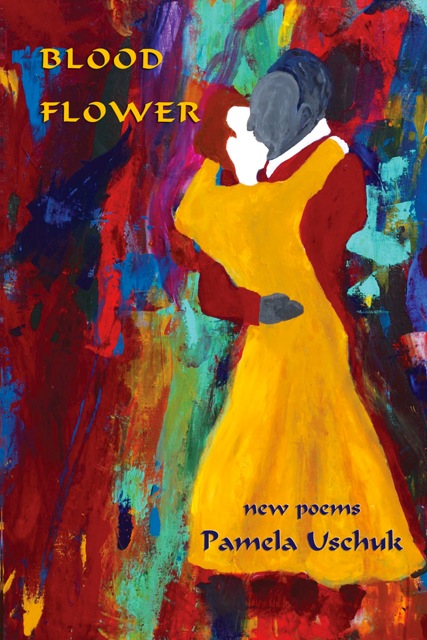 "Every syllable of Blood Flower's warm and revelatory tapestry pulses with discovery—the unearthing of familial ties, the realization of strengths and frailties, the speaking of secrets out loud. The life story that springs from these lines is ultimately undaunted—but the real lessons lie in the journey." —Patricia Smith, author, Shoulda Been Jimi Savannah

"Dense with the colors of ancestral Russia and the American Southwest, the passionate, mindful poems in Blood Flower oppose to loss and sorrow and the multitudinous depredations of history their meticulous tribute to the tangible world of nature and human love. To the unspeakable wreckage of war and the irreparable harm it visits upon father, brother, husband, these poems oppose a hard-won vision of healing and renewal. Even Chernobyl, abandoned by the species that poisoned it, has spawned new herds of buffalo. Divested of illusion and euphemism, these poems have no time for easy pessimism either. They are tribute to the world we must refuse to abandon." —Linda Gregerson, author, The Selvage

"Pamela Uschuk charges into our lives in a variety of forms that explore her background and its larger cultural implications for our world. If on the one hand she can find hope and solace in that past, however mysterious and half hidden, she is also aware of 'what breathes between the dawn death of stars' and leads us 'into black holes of longing'. Most poets would stop there, but Uschuk charges against that bleakness the way 'Defying extinction, cranes snap up blue crabs / in their anthracite beaks, then / roost in branches heaving reflected light.' It is that reflected light in this, her best book, that gives us faith to charge along with her." —Richard Jackson, author, Heartwall and Out of Place

"Pamela Uschuk's new collection, Blood Flower, published by Wings Press, is a reflective meditation filled with deliciously strong narratives that carry themselves from poem to poem. The sturdy and gentle presence of the speaker anchors me in this bounty of luminous words." —Lisa M. Cole, moonglows-reviews.blogspot.com

"'I'm no Commie either'…screamed from within my heart as I read Pamela Uschuk's poem, 'Red Menace'.  It moved my memory into seeing my mother sitting cross-legged in black tights beating on the bongos soon after McCarthy had branded her to the depths of self-imposed imprisonment. Further into the read of Blood Flower, I heard the denial of a history and the words, 'They were German and dead!' It was thirty years later that I learned of my Russian-German-Orthodox and Jewish lineage that settled and farmed Kulm, North Dakota. Blood Flower gave me pause…Blood Flower is a reflection of a people, many people, who traveled a difficult road that helped to weave this American quilt. The oral histories I was denied and yet knew in my heart of hearts existed, fill these pages with songs that nourish understanding and harmony. Pamela's book of treasured poems is a unique gift. She writes with a keen sense of historical correctness and creative mindful presence that trigger a garden of satin dresses, aluminum pitchers, folk music, phosphorous grenades, Siberia and Pacific fog, tethering the vines to the soul of truth. Blood Flower is magical!" —G. Kim Franz, Ph.D. 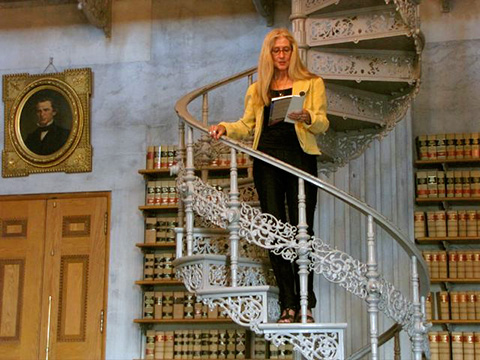 "Pamela Uschuk is a shamanic poet, invoking the spirits of animals, mountains, and forests, to heal a world that humans have spoiled with war and greed. Her latest collection, Blood Flower (Wings Press, 2014), also gives a voice to her family's ghosts, starting with her Russian immigrant ancestors, and moving on to her late brother and first husband, who were permanently scarred by their service in Vietnam. I love the specificity of the nature images in Uschuk's writing. These are not stylized, sentimental birds and flowers. They are 'cliff swallows taking needles of twilight / into their open beaks, stitching / sky's ripped hem.' They are the 'red velvet vulva of roses' and 'yellow ginkgo leaves / waxy as embalmed fans warm[ing] grave stones'. I can believe that they are just as real as the scenes of atrocities that surround us in the news media. Their beauty pulls a bright thread through the darkest stories she tells." —Jendi Reiter, editor, Winning Writers

"American Book Award-winner Uschuk's new collection of meditative, delectably powerful poems offers a steady and generous solace that serves as a platform for thought-provoking glimpses into spirit, family, and feeling. She has written of a tethered reality, commonplace secrets, and emotional rescue. And she is political. Among the more than 40 poems, 'Red Menace' and 'Black Swan' are standouts. In the same vein as her contemporaries Patricia Smith and Joy Harjo, Uschuk is strong in metaphor, urgent in language, and powerful in vivisection." —Mark Elveld, booklistonline.com

Please enjoy this poem from the collection:

A Siberian Cold Front Takes Over the Last Week of April

Siberia, I do not need your sleet today,
impaling me like a fork in a cheek.
Not that you don't feel free to crowd my life with ancestors,
memories of bear paws and shrill white distances
cracking the civilized seams of my brain.
Today, Siberia, my head aches with your steel humidity,
cold as a slug's mucous skirts,
slick as the stone pipe of a shamanka.
I'd like to refuse your telegram.
I am not the she-bear taken as wife by a man.
I will not give birth to the bear boy hero
who'll save the tribe.
Take back your message
to the grandmothers who poke at the ashes
of my beginning-of-the-century thoughts.
Tell them to pack their travois of Arctic wind
and haul away the dull gray blades of these clouds.
Hurry on. Skip my generation of stars.
At the lip of spring
chapped by your kisses,
the numb thud of your heart stunning wisteria, tulips,
the bulging red buds of peonies,
time is short.
I fall daily in love with impossibilities—
the screech owl flying in front of the new moon,
the rufous hummingbird who puffs his throat
like a lung of electric carnelian
through the window,
the man shaped like a grizzly bear
but I know that
just as I feel my womb contract
troops are massing on the other side of the globe
for another war
too quick for even their long talons to stop.